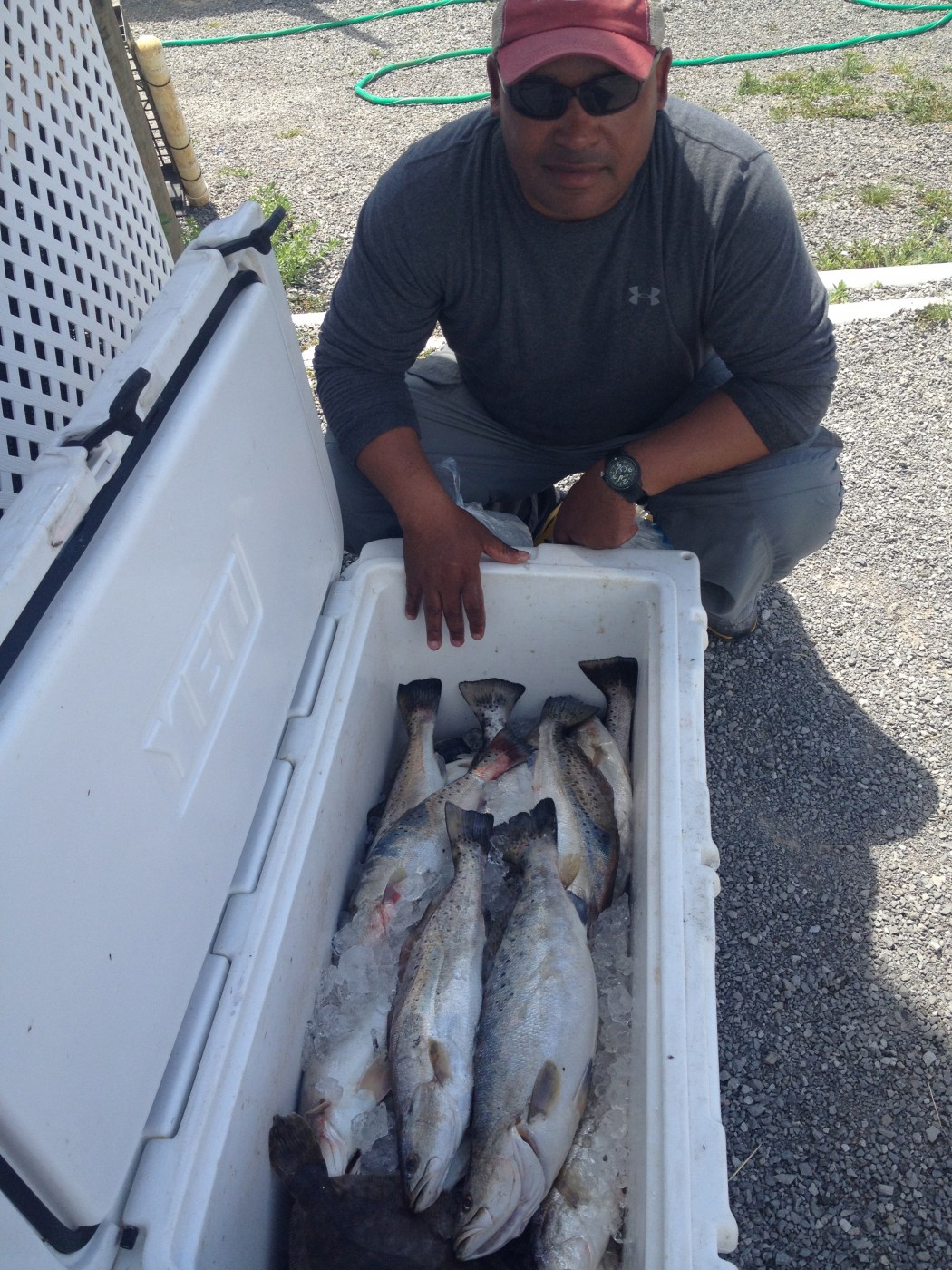 Hotter and hotter the lake gets day by day as march started off a little slow but picking up to full steam as of right now.

March 27 was the first day we saw a two man limit of 50 trout come through DockSide this March.  Trout have been smaller on north end and getting bigger the further south you go.  An occasional 5 pounder has been coming in every few days but we haven’t seen any real monsters yet this March. Look for April to produce several sixes and maybe even a few sevens.  April is my absolute favorite, all plastics and big fish.   I can’t complain for march though except that it is for known for high winds.  This march so far has been about average,  catches of 10-35 trout has been the norm, and sizes have been 13-18″ with an occasional 20+”  kicker fish.   The hot lure for March for us has been the new magneto, avocado and Midnight Mullet Matrix Shad.  We have been using the new black nickel Golden Eye in the 3/8 oz.   The hot spot for eastern Lake Pontchatrain has been the mid lake area on the trestle and the incoming tide has been best.
Look for April to be good as it always is.  The big bait balls start showing up with rafts of mullets coming in.  If you are looking for big numbers of catches the trestle is best.  If you are looking for the real wall hangers you have to really look.  They used to stack up on the Hwy 11 but that has been fading over years.   The twinspan used to hold plenty of 6 pounders but that bridge doesn’t exist any more, but the new I-10 holds some big fish from time to time.  Where we have found a lot of our 6 plus pounders post Katrina has been on mullet infested shorelines.  The last several years we have been catching some real monsters on the shorelines surrounding eastern Lake Pontchartrain.  Each year they seem to show up in a different area so you have to keep looking if you are in search of a real monster in april, break out the top waters and change to the 5/16oz Golden Eye and work your Matrix Shads off the bottom.  Finding mullet rafts is the one and only key to big trout when fishing shorelines.  Also keep and eye on south end of Hwy 11 it has a life long reputation of monster trout so never leave it out.   Always check out videos on DockSide Tv and DockSide Live at www.DockSideLA.com for up to date videos, read the tip of the week too.  It gives constant up to date info on all surrounding areas.  Make sure to pick up some Matrix Shads and come see us for this spring run out at DockSide this April don’t miss out.
www.DockSideLA.com
118A Harbor View Ct.
Slidell, LA. 70458
985-707-2105
Category: Tip of the WeekBy Chas ChampagneMarch 30, 2012

You Know Christmas is Near When You are Seeing Red and Green
December 3, 2020
Go to Top