The Matrix Shad family is proud to announce that 4 anglers on 2 teams finished 1st and 2nd in the Empire IFA redfish tournament out of Empire while fishing the Matrix Shad fishing lures. Out of 66 teams, Team Matrix Shad topped the podium finishing 1st and 2nd, separated by less than 2 ounces.

The 1st place team consisted of Capt. Steven Nick and his partner Matthew Whitman weighing in a very respectable 16.76lb 2 redfish stringer.  Nick and Whitman have been spending countless hours in search of the right fish, and their time on the water truly paid off as they were able to win the Empire IFA this 2013′.  The grand prize for Nick and Whitman’s monstrous 16.76lb stringer was an 18 foot Ranger Banshee Extreme valued at 30,000 dollars. “The Ultra-Violet Matrix Shad on a swim bait hook was the ticket to sucsess” claimed the 1st place team.   Due to an extremely grassy environment, a swim bait hook was necessary to cut the Matrix Shad throughout the thick grass.    An incredible day for these two anglers and excitement was all they could feel as they were in line for weigh in with a fat 8.36 lb and another 8.40 lb. redfish in there weigh bags.  After a very long day of fishing and a 100 plus mile run  their reward was great and a wonderful feeling these anglers will cherish forever. “Special thanks to the Standard E-card map” the anglers claimed this product showed them the pond they found the heavy redfish in. &nbsp; 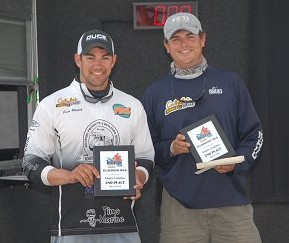 The 2nd place team for the Empire IFA tournament was also Team Matrix Shad, which consisted of Josh Romig and Capt. Paul Sweat.   Sweat and Romig have been no stranger to 2nd place finishes this year so this one was bitter sweet.  Happy of course with another second, this team is still searching for a gold.  Romig and Sweat previously finished 2nd in the LASS Redfish series out of Lake Calcasiue, showing not only their diversity but also knowledge of multiple areas, and also the diversity of the Matrix Shad fishing lure in multiple fisheries along the Gulf Coast. While fishing this event out of Empire this team ran the same direction as the 1st place team of Nick and Whitman. Romig and Sweat used a slightly different technique putting the “Green Hornet” Matrix Shad on a spinner bait to boat there 16.59 lb. stringer bringing home the 2nd place and a $5000 dollar check. The Matrix Shad was fished using two totally different presentations over the weekend producing quality fish for each team.  Having anglers finish in the top is something the Matrix Shad is not a stranger to and we could not do it without the support of our talented and loyal anglers.  Great job and hats off to Captains Steven Nick, Matthew Whitman, Josh Romig and Paul Sweat. &nbsp;