Michael Booth
My name is Michael Booth and I grew up saltwater fishing with my dad. We would make trip after trip to Grand Isle or Delacroix chasing trout in his bay boat. As I grew older I jumped into the world of kayak fishing. I began chasing reds from the kayak all over Louisiana. I recently bought a new Custom Gheenoe and have been fishing more than ever. I fish in large part mostly in southeast Louisiana: in the Biloxi marsh, Reggio, Grand Isle, Cocodrie and Hopedale. I won the biggest trout division at a local tournament the last two years and I won the biggest redfish division last year all using Matrix/Vortex Shad. Once I tried the Matrix products they immediately became my go to. Most of my time spent fishing now involves me sightfishing for reds in the shallow marsh using either a Matrix Craw or Vortex shad. 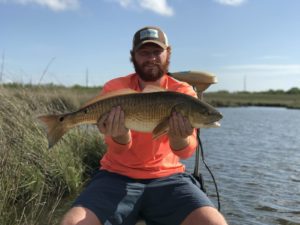