Michael Guidry was fortunate enough to be born in Southern Louisiana, which is
widely known as Sportsman Paradise, Gods Country, and the Fishing Capital of
the World. By the age of 5, he was comfortable with a fishing line in his hand
and began studying the waters, as he would accompany his father and grandparents
on weekend trips.

Since high school graduation, Mike has devoted over 30 years working for
offshore and inland companies where he obtained many of the navigational
licenses he carries today. Three of these years were spent at the mouth of the
Mississippi River running the various waterways and learning new areas, which
has expanded his fishing opportunities. During the past 27 years, Shell Oil
Company has employed him, currently in the position of a Marine Supervior. He
obtained a 100-ton USCG license 35 years ago and now maintains BCO, Barge
Supervisor, and Offshore Installation Manager licenses. This avid fisherman also
manages to find time each fall for hunting deer.

Michael achieved a personal goal when he decided to turn his love of
recreational fishing into a moneymaking venture for himself. His experience,
foresight and vision regarding guide fishing have been central to the formation
of his company. After incorporating Rippin Lip Guide Service, he successfully
obtained sponsorships from the following companies: Mercury Marine, Power Pole,
Pure Fishing, Dual Pro battery chargers, Blue Wave boats, Minn Kota troll
motors. Mikes participation in the IFA Red fish tour and ESPN’s Red fish cup
take him across the United States and will generate exposure for your company as
a traveling billboard.

Michael is married to his high school sweetheart and will be celebrating his
33yrs wedding anniversary this fall. He is the father of 2, boy 28 & daughter
25. 5 grand kids

Here is a link of this months La. Sportsman Mag I did plus made the front cover
with it.
http://www.louisianasportsman.com/details.php?id=9224 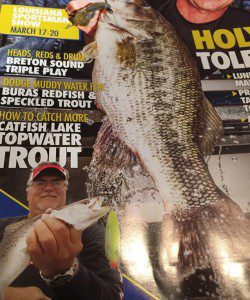